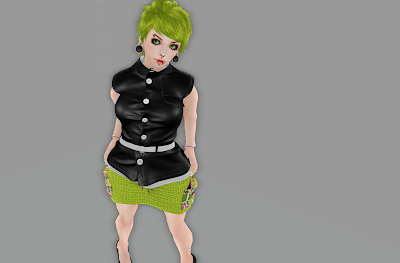 Cross-posted to Alt.
Posted by Unknown at 9:09 AM No comments: 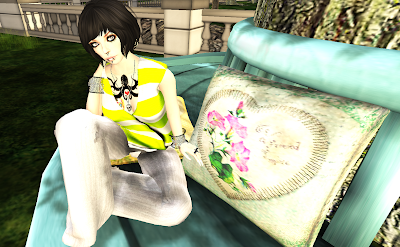 The best thing about the summer is the shade!  I'm not a very outdoorsy person.  Heat, bugs, sunburn, grass... What can I say?  I'm an indoor cat.  The only thing I can stand is being in the water.  But if I absolutely must leave the house, you can find me in the shade, in the airiest clothes I can find.  These gauze pants from Vigilante Fashionista are the epitome of airy.  I mean, gauze - how much lighter can you get? I was happy to be wearing these pants - ever since I picked up the Banna Girl outfit, I've been contemplating what sort of outfit I wanted to put together with the components.  I'm a huge fan of this one! It's very summer-y, and a little preppy.  What do you think?

Cross-posted to Alt.
Posted by Unknown at 9:25 AM No comments: 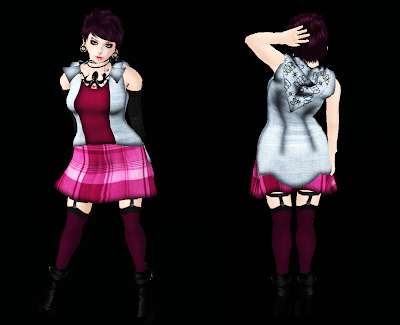 The Sexy Nerd Hunt is on!  With loads of nerdy goodness, how can you possibly plan to skip it?  Naturally, I was all over Vigilante Fashionista's offering - the Geeks & Nerds Dress.  The back is totally adorable, and the little hood says geeks and nerds!

Naturally, I was into the idea of the sexy nerd hunt.  The offerings are kind of nerdy and kind of geeky, and they're all pretty neat. You might be wondering what the difference between a nerd and a geek is, because some people use them interchangeably.  While it's true that a nerd can be a geek and vice-versa, nerdery and geekdom are different beasts.
Nerds are marked by intelligence.  Geeks are marked by interest.  Nerds understand the way things work, and if they don't understand something they're interested in, they frequently make an effort to learn it.  Geeks are viewed as being interested in things that most people aren't into, and geeks often know a lot about their interests.  Let's try using those definitions with computers.  Computer nerds might know everything about how their computers work from the ground up.  Computer geeks probably love computers, use them a lot, and maybe even know obscure trivia about computers, but a computer geek (who isn't also a computer nerd) might not know a lot about how and why computers work, and might not be compelled to find out.
We typically associate geeks with fantasy, science fiction, and video games.  Nerds are more often related to computers, science, and math.  Really, though, you can be a geek about anything, and a nerd about anything.  For example, I'm a huge sociology nerd.  I'm also a textbook example of a geek.  There's definitely been a significant cultural shift in the past decade - instead of geeks and nerds being a few solitary losers in high school, the internet has made geekdom way more accessible, and it's responsible for bringing geek communities together despite great  distances between their members.  Being a geek or a nerd isn't as lonely in 2013 as it was in 1983!

Cross-posted to Alt!
Posted by Unknown at 12:56 PM No comments:

A Pop of Color 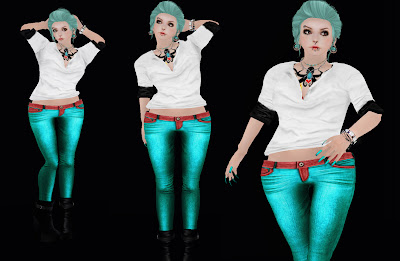 While I have my fair share of all-black outfits, I find it very exciting to liven up my wardrobe with a pop of color.  Since white and black go with absolutely anything, this white top from Vigilante Fashionista's Omstud outfit pairs exquisitely with my fancy-pants Loovus Dzeavavor jeans.  Years ago, fashion magazines were handing out praise left and right for ensembles that were basic white or black with one neon statement piece.  This is one of the only things I remember about my fashion mag days.  Even though I wasn't very fashion-forward at the time, I'm having a great time patting myself on the back for remembering that... and for being awesome.  Mostly for being awesome, actually.

Cross-posted to Alt.
Posted by Unknown at 7:15 PM No comments: 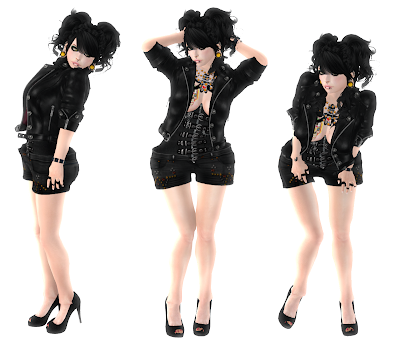 The awesome thing about buying outfits with multiple pieces is the opportunity to use individual pieces in outfits that are 100% less wholesome than the original set. Personally, while I can appreciate the work and planning that goes into an outfit that a creator sells, I like to pick it apart and work with the pieces to create things that are even more to my liking.

For this outfit, I've dissected Vigilante Fashionista's Omstud and Envious' Bluff Reload to create a work of art.  I'm super proud of the matching in this outfit - my plugs, my necklace, and the silver bits of the corset all match the studs in the shorts.  Yes, that took some planning.  I know I'm amazing - you don't have to tell me.

Cross-posted to Alt.
Posted by Unknown at 5:00 AM No comments:

From Dusk till Dawn with Vigilante Fashionista 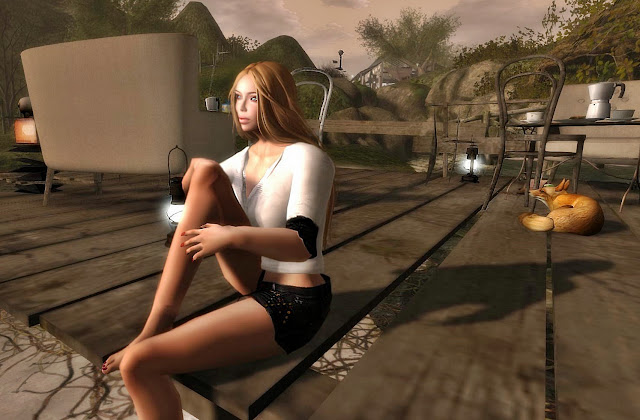 Have you ever just sat down and looked into the sky and just day dreamed. Not for anything in particular you just start staring at the water around you, glancing at the trees nearby, spying a bird or two flittering across the sky. You seem content and happy, yet there was just something that made your mind drift away.

Sometimes that happens to me a lot, it can happen when I am content or with friends. I find myself wishing for something greater, something more.  Daydreaming for what? I ask myself why certain things happen, Why can't I control life.  I guess, simply put..It's your life. It's ok if you can't control others. It's just not ok if you can't control your life and let others control yours.

You only have one chance to live this life. Don't pass this precious chance to others. It's your life.
It is completely yours. Make it how you want it to be, live it your way, but don't waste it. This is what I tell myself everyday. I am my own destiny, and for those of you that strive for something more, you only have one life so enjoy.. cause you should do what you want with it and don't let anyone change it..

This awesome setting for photo 1 and photo 2 is at Neva River. Thankyou so much for allowing me to take this photo.

For our destination today, I would like to take you to Room 69.. Everything at $69L or under. So don't delay, come take a visit to our destination below and see some of Vigilante Fashionista's awesome works..

Posted by SL Destinations R Us at 1:30 AM No comments: 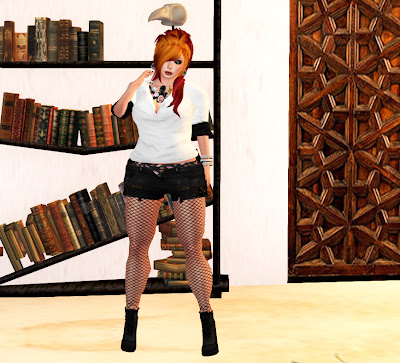 How awesome are these shorts?  They're Vigilante Fashionista's Omstud shorts, and they are awesome!  I don't know if those little silver studs were deliberately shaped like Triforces, but I can probably curry some geek cred regardless of the creator's intent.  If you're not famliar, the triforce is a relic representing the essences of the Goddesses.  It's a big triangle comprised of three smaller ones - the Triforces of Wisdom, Power, and Courage.  BAM.  Just dropped some Legend of Zelda knowledge on you.  You just got a little bit geekier without even trying.  You're welcome. 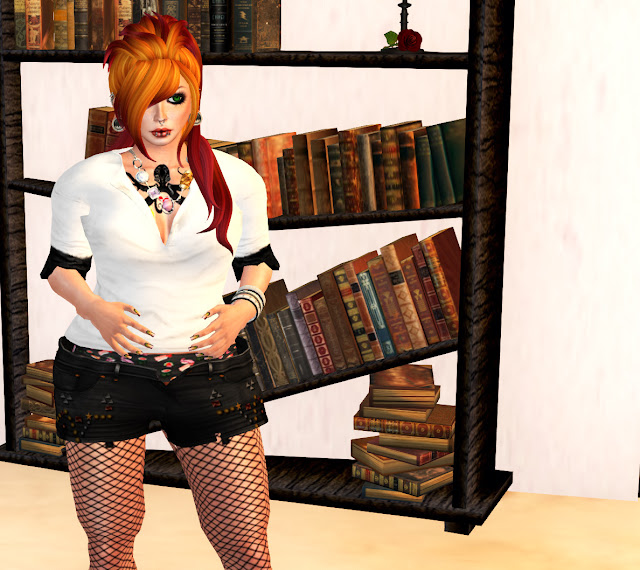 Cross-posted to Alt.
Posted by Unknown at 5:00 AM No comments: 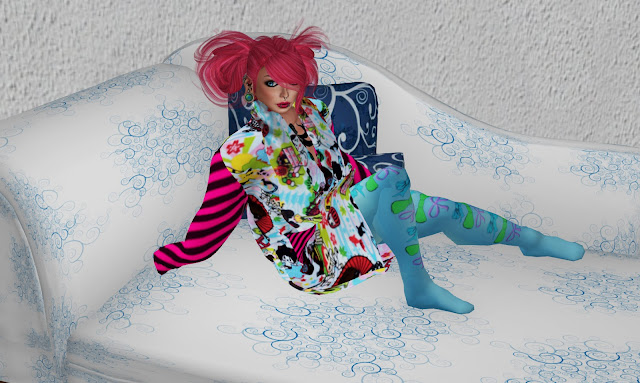 So why am I talking about Snuggies? Because I'm wearing one!  Well, not a branded Snuggie.  It's Vigilante Fashionista's Ultimate Kawaii Snuggy!  It's covered in adorable cartoon characters, and the outfit also comes with these beautiful blue tights with little bows on them!  These are definitely the cutest articles of clothing in my wardrobe, so I donned my most adorable hair and snuggled up for a photo session. 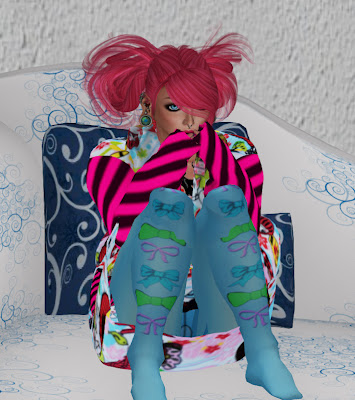 How freakin' adorable am I?  SUPER FREAKIN' ADORABLE.

So how can you get this absolutely precious ensemble?  Participate in The Ultimate Kawaii Hunt!  1L$ per item (so you'll need 51L$ if you find all the prizes!) and it ends June 15th!  Just look for the popsicle!  And once you get your snuggy, if you want to have a pajama party, you know where to find me.

Cross-posted to my primary blog, Alt!
Posted by Unknown at 5:00 AM No comments:

Vigilante Fashionista's The Wandering Eye for the Eye See You Hunt! 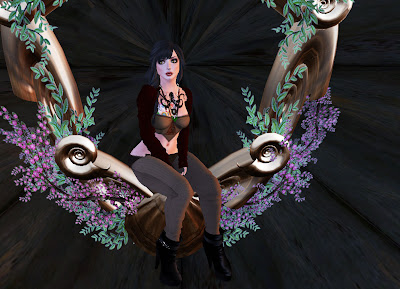 The Eye See You Hunt is almost over, so if you want to join you'd better do it quickly!  The hunt will be over on June 4th, and this is Vigilante Fashionista's beautiful contribution.  The Wandering Eye is a gorgeous outfit that consists of pants, a top, and a mesh bolero jacket  The design on the front of the top appears to be the Eye of Providence - the all-seeing eye.  Coincidence?  Of course not, this was made for the hunt!

I love the deep crimson color of the jacket.  The pants look phenomenal, and while you can't see it well in the photo above, the waist of the pants is a dark sash with two buttons.  You can see a picture of the details below.  The Wandering Eye is has an air of mystery that I find myself inexplicably drawn to.

Remember folks, it's the very last day of this hunt, so you'd better hustle if you want to catch this outfit before it's gone, and I promise that you do.

Cross-posted to my primary blog, Alt.
Posted by Unknown at 8:00 AM No comments: 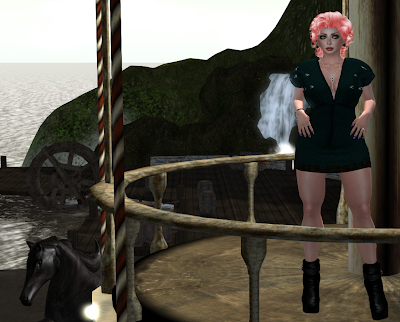 Let's talk about awesome things: carousels, this outfit, and Room69.

First off, carousels: how cool are they?  When I was a child, the carousel was one of my favorite carnival rides to indulge in when I was finally coming down from my cotton-candy-fueled sugar high.  They're mellow, they're colorful, and some are really creative.  (Seriously, why ride a horse when you can ride something exotic like a tiger or a unicorn?)  It All Starts With a Smile was my second stop on the photo tour I was taking, and they had this really neat traditional carousel that I absolutely had to pose on top of.

Second order: This outfit is one of my new favorites.  It's casual, but classy.  Being classy is something new and exciting for me, so tell your friends, because I'm not sure how long this will last.  In this photo I'm showing off an awesome forest green dress from Vigilante Fashionista that's being sold exclusively at Room69.  Which brings me to my final point...

Room69 is kinda sorta REALLY FREAKING AWESOME.  All kinds of designers are contributing to Room69, and are offering some awesome fashions for just 69L$.  (That's the gimmick, get it?  Room 69, 69 Lindens... oh, you get it.)  Room 69 is a monthly circular event that begins on the first of each month and ends on the 20th.  Don't hesitate to stop by, because if you love this dress, you won't be able to get it once the 20th is over!  You can check out all of the fashions available this month on the Room69 blog, and for the latest news you can like the Room 69 Facebook page!

Here's the skinny on my sexy outfit.

This post has been cross-posted to my primary blog, Alt!
Posted by Unknown at 8:00 AM No comments: